On Monday 8th April at St George's Hall seven schools, including Chellow Heights, performed in an evening of entertainment that included singing, dancing, acting, signing and lots more.  Our pupils performed a Wizard of Oz themed call and response story, our fabulous Flamingo Chicks performed along with Chellow Beats and Zainab brought the house down with a rendition of 'I just can't wait to be King' from The Lion King, together with our Music Therapist Mike Gilroy.  Pupils spent weeks working on their performances and the hard work really paid off.  It was especially nice to see former Chellow Heights pupils flourishing as they performed as part of their secondary schools and it was also a lovely opportunity for our children to work alongside the schools they will likely go on to attend.

A huge thanks to all staff who gave up their time to support the children in what was an amazing evening, and also to all parents involved for their continued support.  I'm sure you will all agree they did us proud.  Please take a look at some of the photos from the event below.... 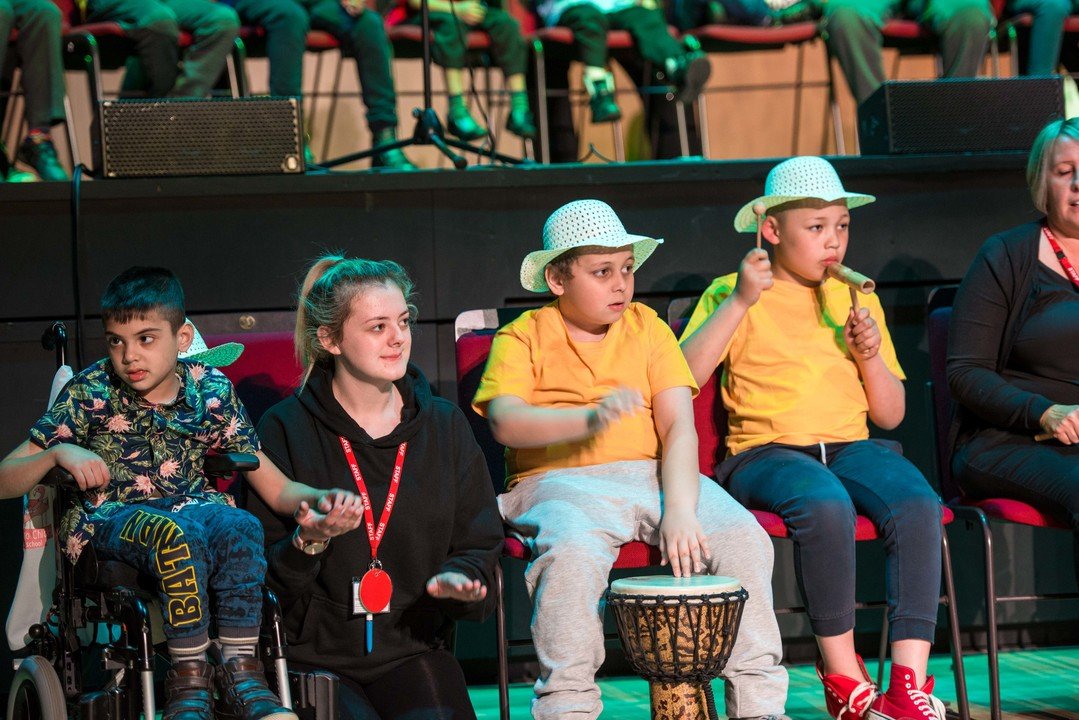 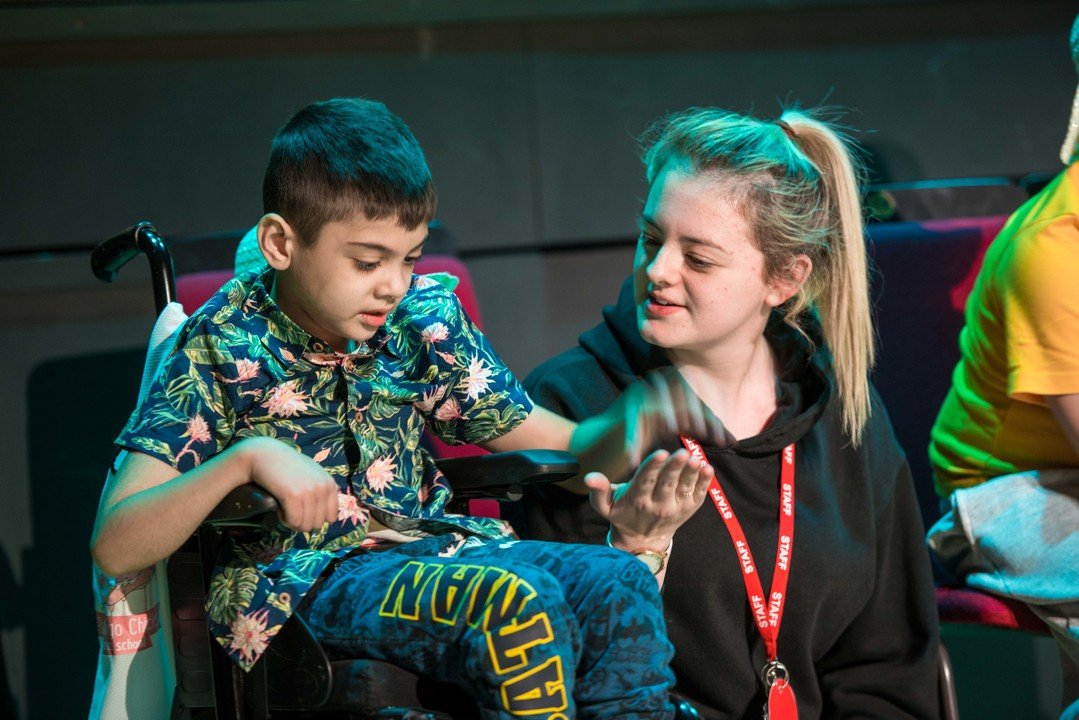 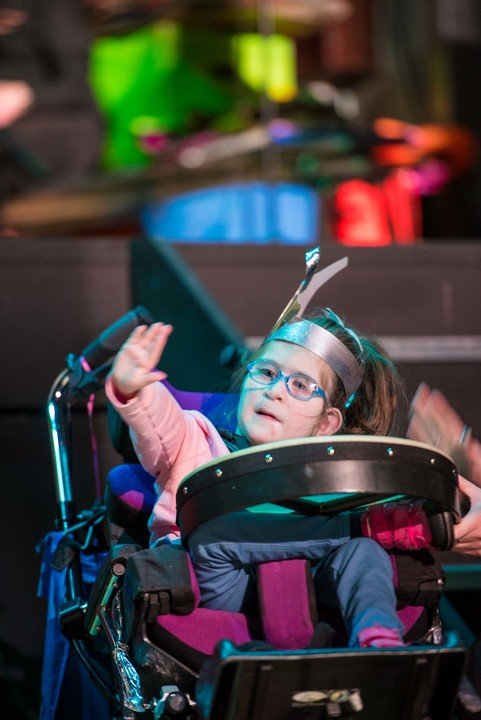 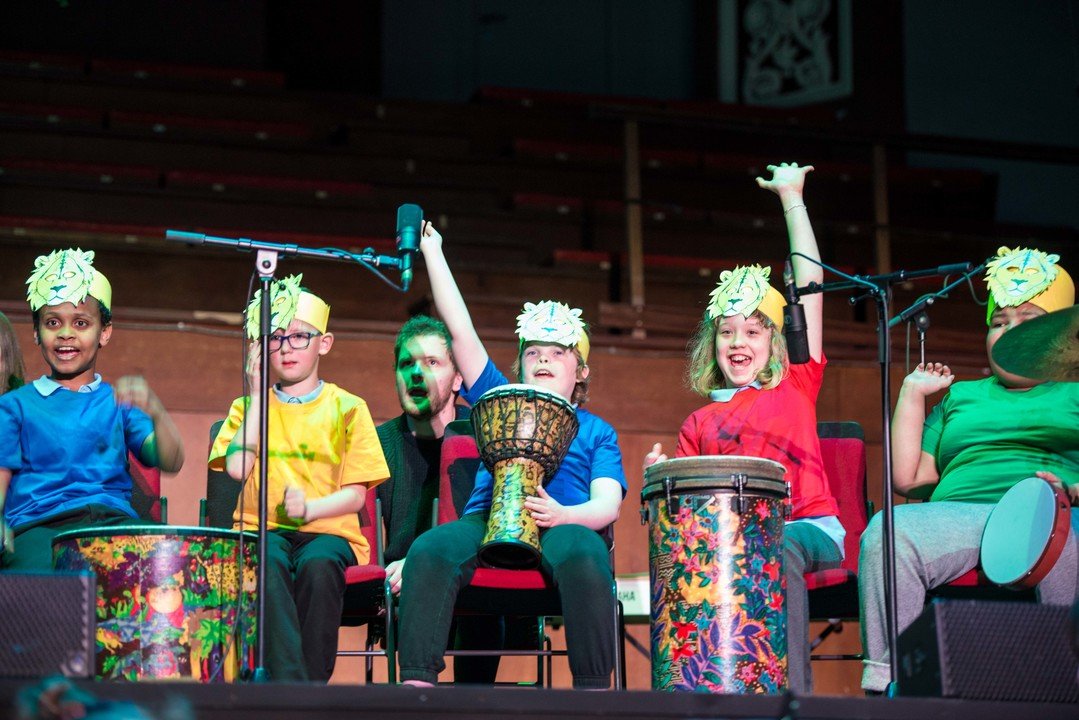 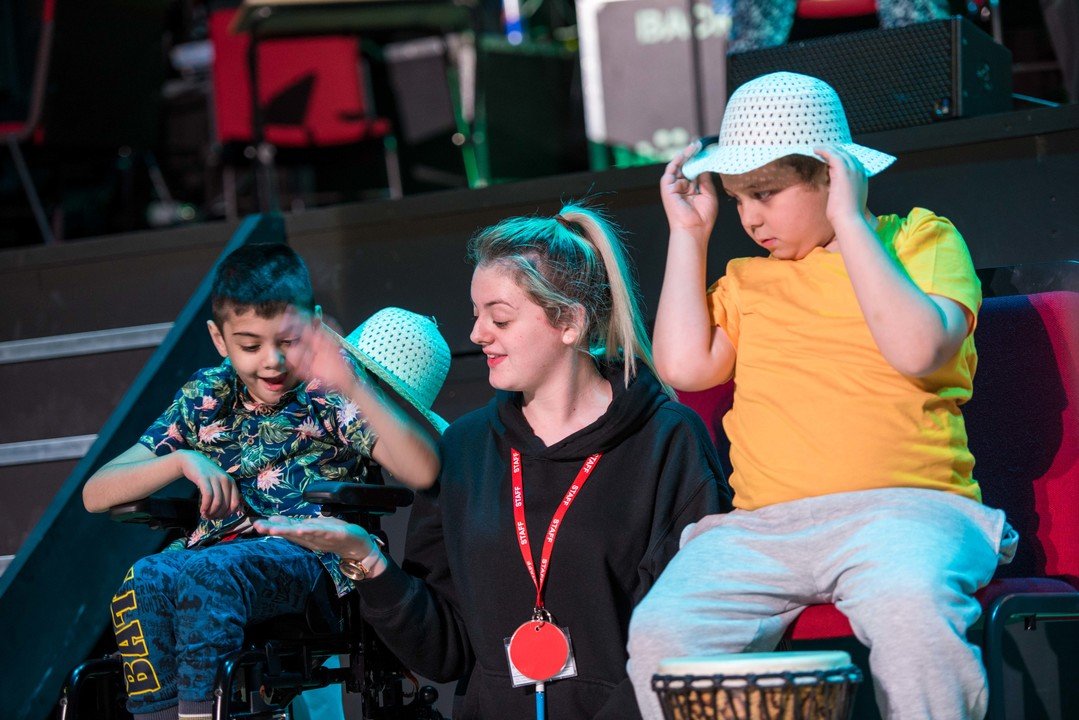 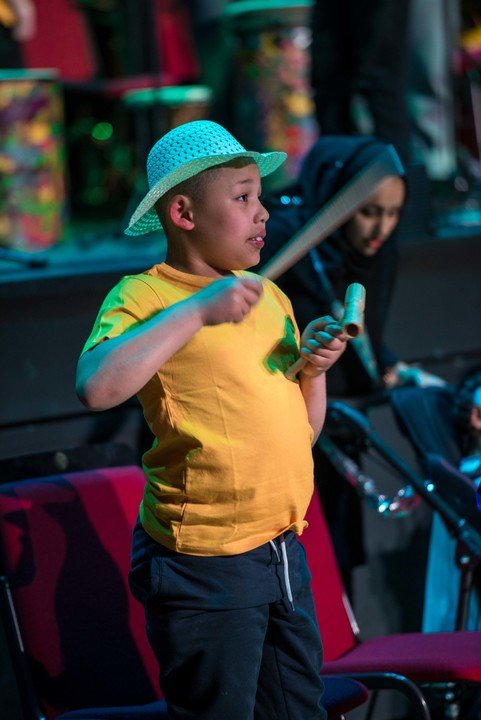 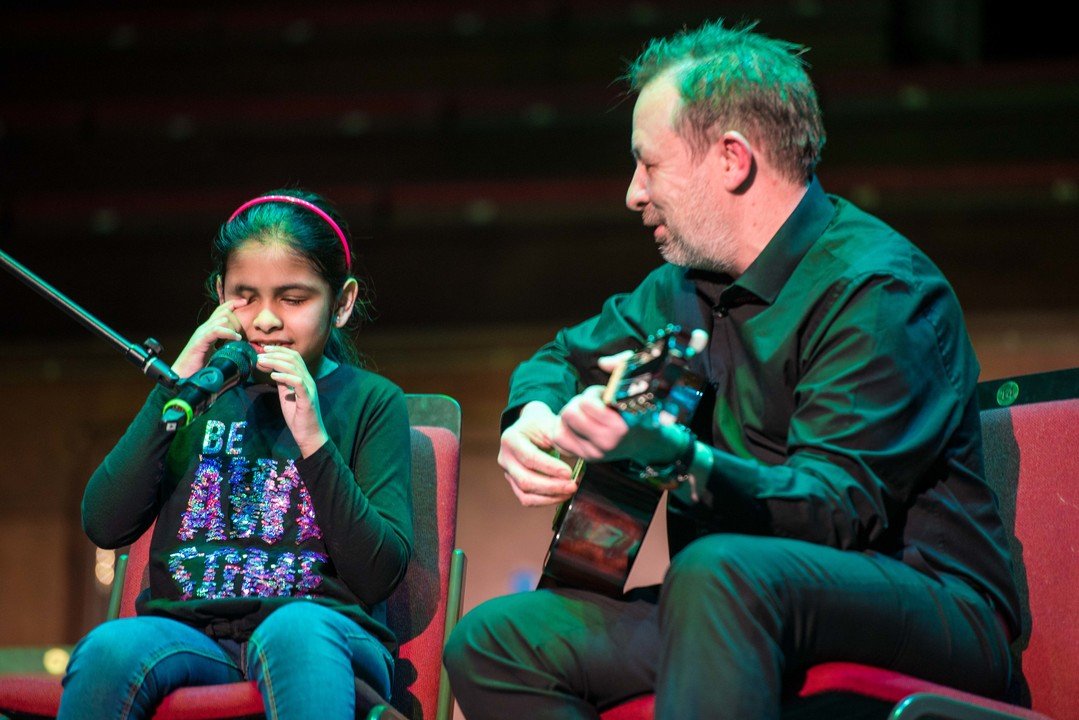 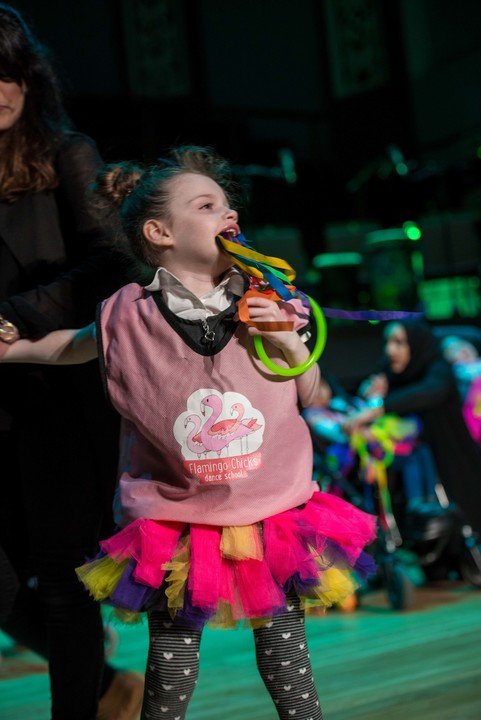 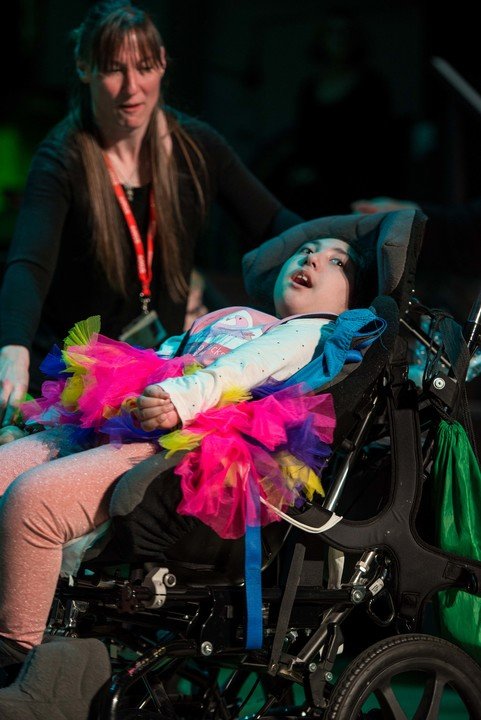 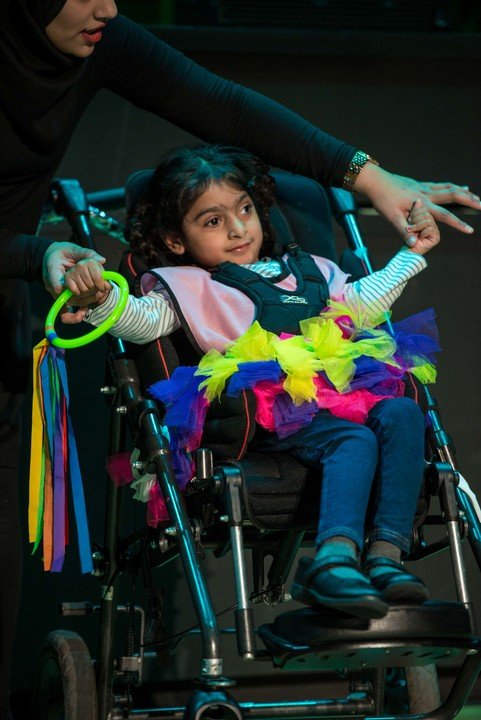 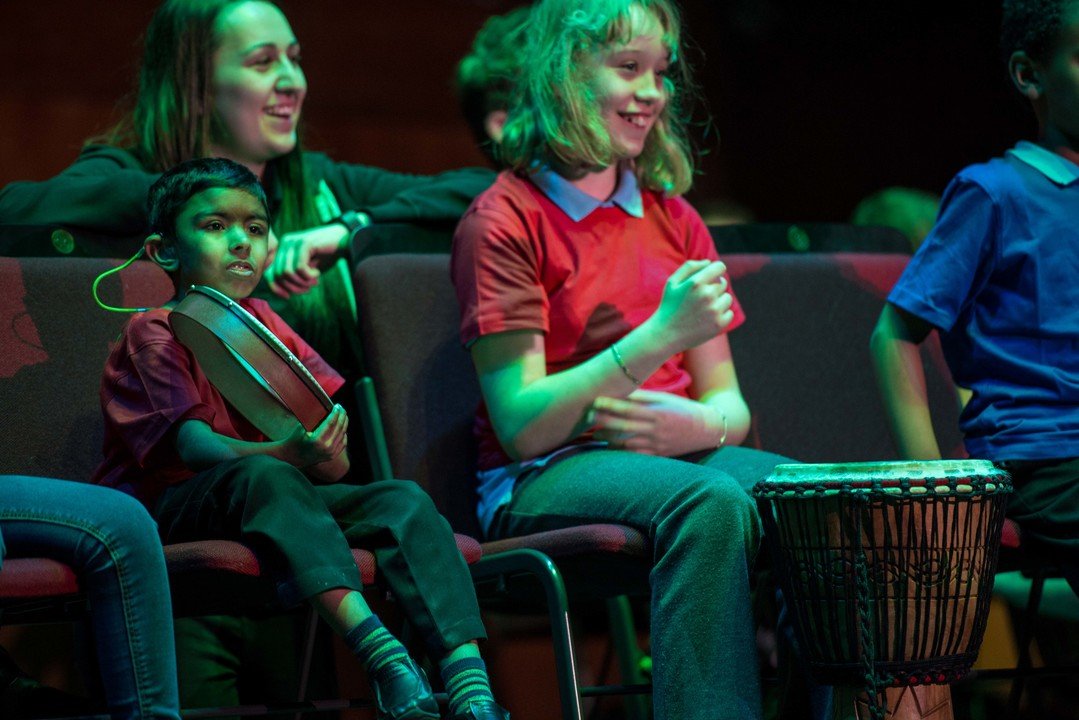 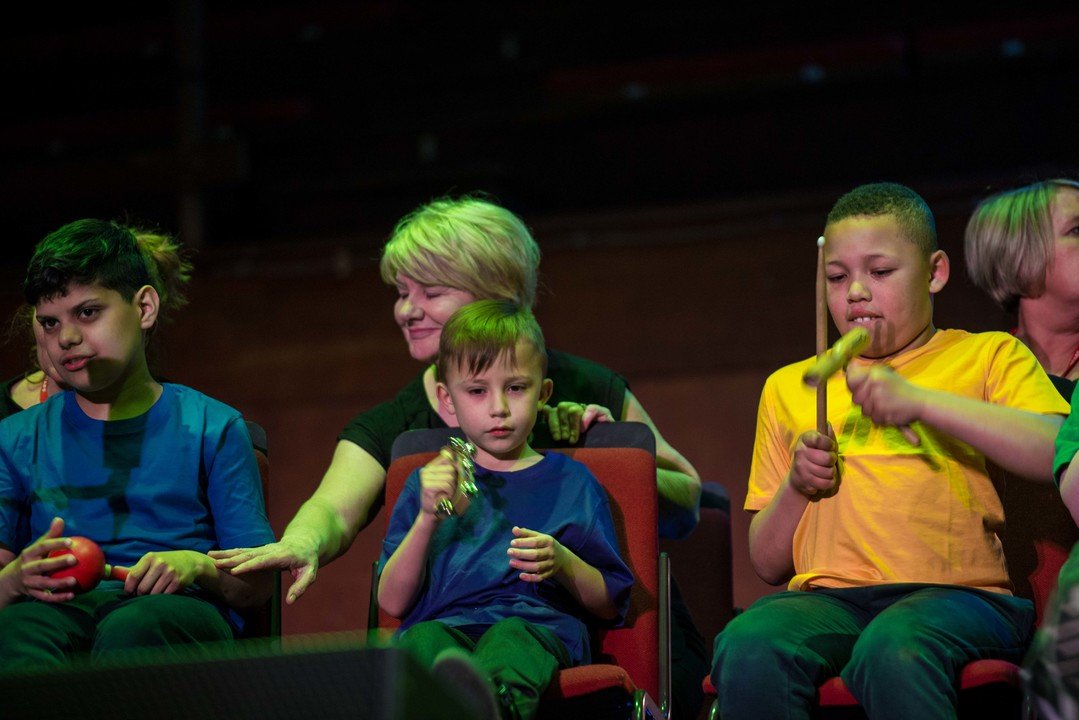 Back into the musical swing of things and a much loved new arrival....

Lots of our pupils have been enjoying their music once again at Chellow, and our fantastic school band, Chellow Beats, has met on both our West and South site.  Watch this space for more info on upcoming performances.

We are also looking forward to welcoming a full brass band to the school for the very first time - Vintage Brass will be coming into school on Tuesday 11th December to perform a Christmas Concert for both sites.  Sleigh bells at the ready!

Also a huge thank you to Sue Thompson who last term donated a fabulous Hammond style organ to our west site.  The children continue to enjoy all of its possibilities and have a great time making music with it! 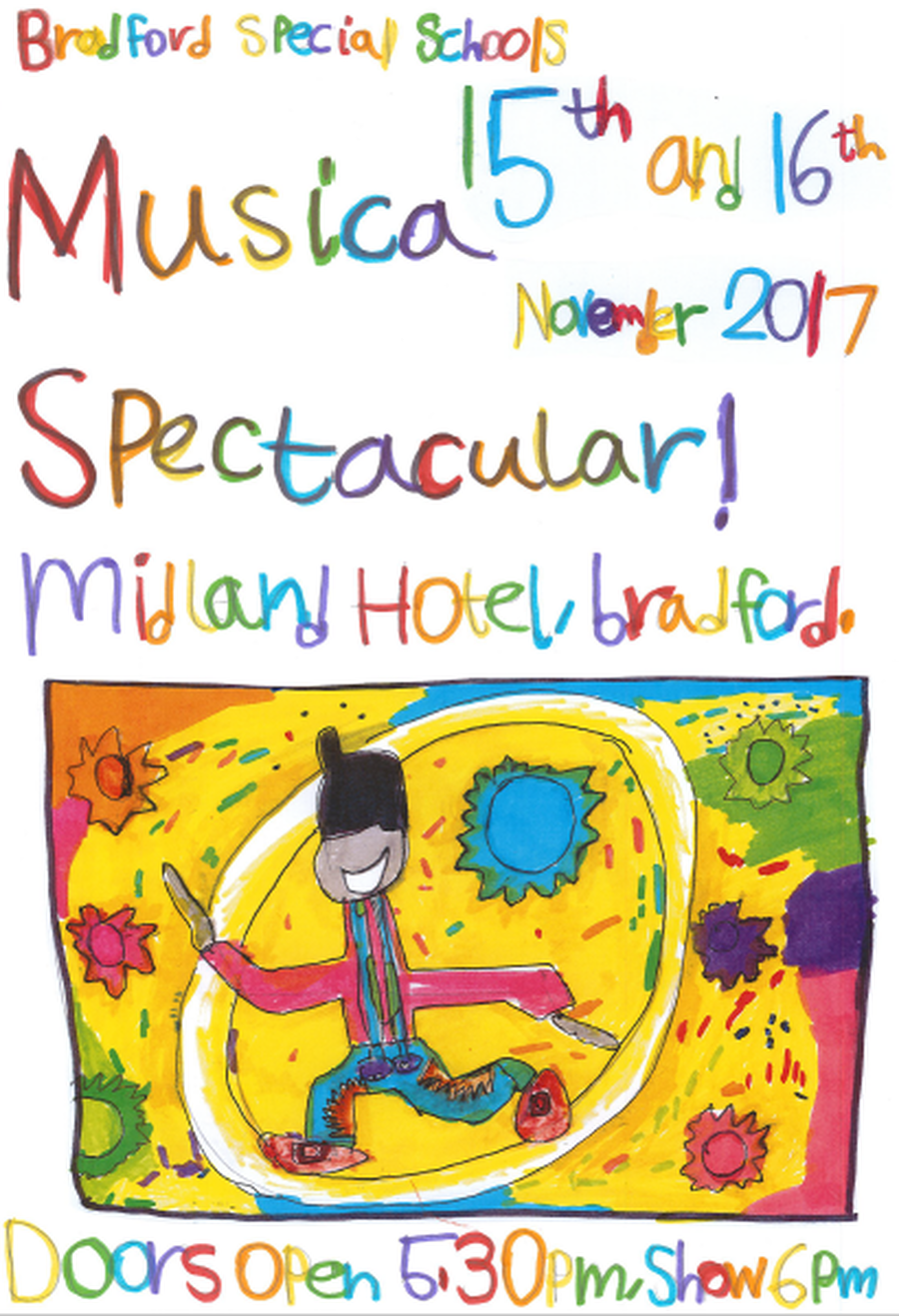 On 15th and 16th of November 2017 6 special schools from across the Bradford district took part in a special event, held at The Midland Hotel, that showed the very best of Music and The Arts in action in our special schools.  Audiences were treated to singing, dancing, acting, drumming, signing and lots more, as children from Hazlebeck, Delius, Southfield, High Park, Beechcliffe and Chellow Heights performed over the two nights.

Deputy Lord Mayor Councillor Doreen Lee attended on the 15th November and said how proud she was of all children involved, also commenting on the quality of the many performances that were given.  On Thursday 16th November Councillor Sarah Ferriby was thrilled to have been able to watch all of the performances and also said how remarkable all of our talented young people were that performed.

A huge thanks goes to Bradford Music and Arts Hub for securing funds the event, staff from every school involved that worked tirelessly in the build up to the concerts and for making both evenings so special, families and friends who came to support on both nights, and of course the biggest thanks goes to all of the children that performed - you are all superstars!

Bands, singing, dancing, acting, face painting and wrist bands all on display at this year's Chellowfest....

On Wednesday 28th June we had our annual music festival 'Chellowfest', which had a genine festival feel to it this year as it rained all day!  We didn't let that stop us though and pupils from both sites enjoyed a full line-up on stage in the hall.  Performances were given by our visiting friends 'Chellow Brass' throughout the day, and pupils had the opportunity to get up close to the instruments that were being played.  The staff band, The Manic Street Teachers, performed two tracks, along with a performance by the staff drumming group that the children really enjoyed.  We had face painting on as well and once again there were some fab festival wrist bands on display, along with some great tie dye T-shirts and the ones designed by pupils at World Music Day.

The real highlight of the day was of course the many performacnes given on stage by children from both sites.  We had drums, shakers, tambourines, microphones, guitars, wood blocks, wind chimes, bells, cabasas, guiros, cymbals and rain sticks all on display - and that was just the music!  Tigers class, Turtles, Ducks, Butterflies, Monkeys and of course our very own Chellow Beats all gave memorable performances and Elephants class performed their very own production of 'Scary Jungle', which was written by one of the pupils and included elephants, tigers, frogs and snakes.  Thanks to everyone involved in the planning and to all staff and pupils on the day for making Chellowfest 2017 so special.  We look forward to next year!

Our pupils at Chellow South welcomed some friends from Chellow West for the day on Wednesday 21st June to celebrate World Music Day.  Classes moved around school throughout the day and enjoyed a Stomp style junk percussion workshop, exploring new and different instruments including a flute, clarinet and harpsichord (courtesy of our Head Sue!), designing T-shirts for Chellowfest, a chill-out and sensory Music zone and a Music tech room.  On top of all of this we had some brilliant performances from some of the pupils and groups at chellow and welcomed back our friends from Bowling Park primary school.  They brought a rock band this time round and played familiar songs by ed sheeran and others on xylophones, drums, keyboards, guitars and of course singers.  Huge thanks to all staff on South and those that came from West for making the day such a success!

On Wednesday 17th June our very own Chellow Beats travelled to Craiglands Hotel, Ilkley, to take part in the Music Makers section of the Wharfedale Music Festival 2017.  We really enjoyed the chance to listen to two other groups, who sang and played lots of different instruments, before we took to the stage.  But before Chellow Beats performed, Emma Edwards gave a lovely rendition of 'When you Wish Upon a Star', that she sang in our production of Toy Story, to raptuous applause.  After that the main group, made up of children from Elephants, Meerkats and Lions classes, took to the stage and gave a great perfromance of 'Oceans', a piece that uses rhythms that the children themselves have come up with. We received a certificate and some lovely supportive and positive comments from the professionals that were listening, who were especially impressed with how well everyone played in time together.  Well done all, another great perfmance and thanks to all staff who came along to help.  A fun filled musical day out was had by all!

In the final week before the Easter break our Key Stage 2 children gave two great performances of our own adaptation on Toy Story, which celebrates it's 21st birthday this year.  Classes featured as Pirates, Teddy Bears, Soldiers, Mr and Mrs Potato Heads, Dinosaurs and of course we also had our very own, Fairy, Mrs Bo Peep, Buzz Lightyear and Woody.  Well done to everyone involved and a special thanks to our ICT team for all the hard work and to Sian in Leopards for helping with the set.  Thanks also to John Lambert, our Chair of Govenors, for attending and saying such kind words of congrtaulations to the pupils, who were fantastic.  We also made it into the Telegraph and Argus, and the article can be found here:

On Tuesday 28th February, 9 children from Elephants, Lions and Meerkats classes on our West site and 3 children from Chimps on South met in Saltaire for the chance to listen to some live music.  'Red Priests' are an early music/folk band and we got the chance to listen to a Harpsichord, Cello, Guitar and Flute.  Plus what was introduced as 'the smallest recorder in the world' - Amazing!  We enjoyed sitting on the front row and the instruments were so close we could almost touch them!  After the concert we even had our picture taken with the band and got to meet them and ask questions about their music.  A huge thanks to all staff who made it possible from both West and South and we look forward to more opportunities to hear great music played live!

The run up to the Christmas season saw our children at Chellow on both sites enjoying some musical festive treats, firstly with a visit from the excellent school choir from Bradford Grammar School and then from our visiting brass group, who entertained children and staff alike with some carols and Christmas tunes - Jingle Bells definitely proving to be the children's favourite.....with some fab accompaniment from our many budding drummers!

Busy Start to the new term....

Well it's been back to it with a bang and some excellent work across both sites from children that have 1-1 Music lessons to small group ensembles and whole class Music and Art work.  Our Elephants and Meerkats classes on our West site have been working hard learning all about Harvest Festival.  We talked about how we are happy that we can help people that don't have enough food to eat by giving and listened to different styles of music.  The classes painted while they listened to fast and uplifting music and also to slower classical music, and the finished Artwork (see below) will be presented in our Harvest Festival assemblies, where pupils will also perform their own musical compositions around the same theme.  Lot's of fun had by all and some great work - well done! 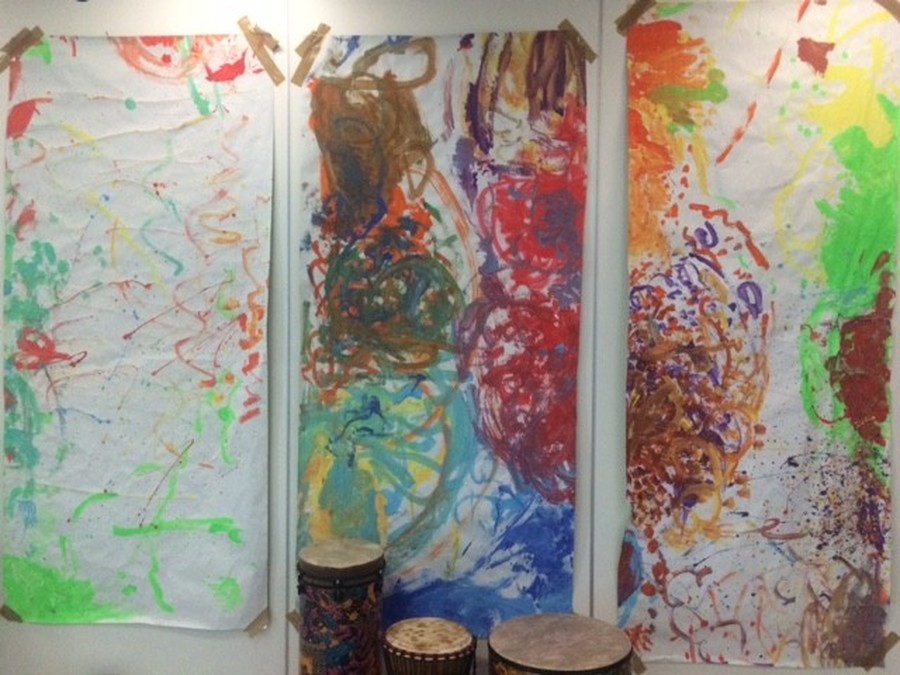 Our very own school band Chellow Beats, fresh from playing at Chellowfest on wednesday, gave a brilliant performance in the middle of Bradford to an audience of around 400 primary school children.  As always they were excellent and were a real hit with those listening.  We also enjoyed listening to a rock band on arrival and joined in with some Zumba before it was our turn to go on stage.  After St George's Hall in March and Chellowfest this concludes our 2016 tour!  Well done all - once again you did Chellow Heights proud....

On Tuesday 21st June we celebrated World Music Day.  Our South site were joined by 12 enthusiastic pupils and 6 staff from our West site for the day, during which we celebrated the Music that has made Britain great and known the world over. Classes celebrated the 1960's, 70's, 80's and 90's onwards and our pupils visited each 'decade' in turn.  In addition we enjoyed performances in the hall from our very own Chellow Beats group and a Mozart piano solo from one of our pupils, and rounded the day off with a whole school Music assembly, celebrating the genres of Classical Music and Jazz, before getting our dancing shoes on for a school wide disco of tracks from the decades.

A special mention must go to our visitors though, as we were treated to a superb Reception Year choir from Newby Primary School, complete with soloist (!), and a visiting Year 6 girl band from St Stephens Primary School.  We are looking forward to playing for them at their school soon as well!  The final thanks is to all of our wonderful staff who once again entered into the spirit of the day and dressed as everything from hippies to rockers, punks to 90's boy bands and almost everything inbetween.  Thank you:-)

Page Hits: 00010
© 2020 Chellow Heights Special School.
school website, mobile app and podcasts are created using School Jotter, a Webanywhere product. [Administer Site]
We use cookies to provide you with the best experience on our website. Read our Privacy Policy to find out more.